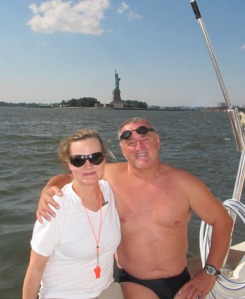 Yesterday afternoon a small group of us (myself, Dan, Jason, Emeka, and Martin) hit the water for a test swim prior to event day. (Just a month away!)

We start at Lincoln Harbor in NJ, and head south toward the swim route. 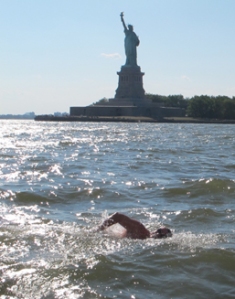 On the way, we stop by the Statue of Liberty so that Martin can take a dip.

Then to the Verrazano Bridge, where we decide that on event day, we would shoot for as far west of the Brooklyn stanchion as possible without entering the shipping channel.

(It is interesting to note that Rose’s coach claims that she covered 25 miles during her Aug. 13th swim. I think that she must have gone much closer to the Staten Island shore than we are planning to.)

From the Verrazano, we get our first glimpse of the space ship shaped top of the parachute jump, blinking in the distance.

We round Norton’s Point, head over to Steeplechase Pier, and pause to watch the jet skiiers with an obvious death wish.

Then we head back north, toward Lady Liberty (rain on the horizon…by Newark, we figure), through Buttermilk Channel, hugging the Brooklyn shoreline per our swim plan.

As we go up the East River, under the Brooklyn and Manhattan Bridges, just past the Williamsburg, the heavens open, and we are caught right in the middle of some of the worst weather that Captain Dan has seen in this area, ever.

We are forced to turn around at Corlears Hook (planned point for crossing the East River from Manhattan to Brooklyn during swim), and so are unable to make it up to East 26th Street start point.

At first we take this as a bad omen…but then we turn around and see this:

From our point of view, the rainbow crosses the East River at exactly the same point that the swimmers will cross on event day.

This entry was posted on July 14, 2011, 1:41 pm and is filed under Uncategorized. You can follow any responses to this entry through RSS 2.0. You can leave a response, or trackback from your own site.